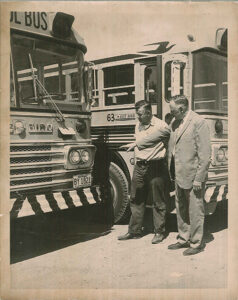 Kottkes’ Bus Service began in 1947 by George Kottke. While George was doing a milk route in Champlin he was told of the need for a school bus route in the area. Realizing an opportunity, George purchased a bus and began transporting students during the hours he wasn’t doing his milk route.

George married Gladys Quackenbush in 1948 and since she also wanted to drive a bus, he gave up the milk route and bought another bus. Gladys Kottke went on to become Anoka’s first recipient for “Businesswomen of the Year” , an award she received several other times during her career.

In the fall of 1951, Champlin School District # 220 consolidated with the Anoka district to become Anoka-Hennepin Independent District # 11. At this time the Kottkes’ family expanded their fleet to 21 school buses.

On December 20,1961, Kottkes’ Bus Service became incorporated. By this time the fleet size had grown to 49 buses and they employed 70 people.

Kottkes’ Bus Service Inc. has been under contract with the Anoka-Hennepin Independent School District #11 to transport students since 1947. In that period of time, Kottkes’ has grown from 1 bus to a fleet of nearly 200 vehicles, and from employing one person to a work force of over 215 people.